This poster of a poem was spotted in a Tokyo shop window by Zeuler Lima, on leave to teach in Tokyo this semester. He has “roughly” translated it as:

But we can’t see the roots. 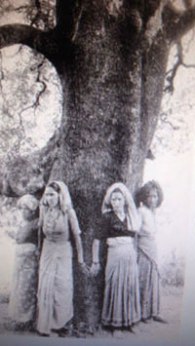 Chipko movement, also called Chipko andolan, nonviolent social and ecological movement by rural villagers, particularly women, in India in the 1970s, aimed at protecting trees and forests slated for government-backed logging. The movement originated in the Himalayan region of Uttar Pradesh (later Uttarakhand) in 1973 and quickly spread throughout the Indian Himalayas. The Hindi word chipko means “to hug” or “to cling to” and reflects the demonstrators’ primary tactic of embracing the trees to impede the loggers.

With the conclusion of the Sino-Indian border conflict in 1963, the Indian state of Uttar Pradesh experienced a growth in development, especially in the rural Himalayan regions. The interior roads built for the conflict attracted many foreign-based logging companies that sought access to the region’s vast forest resources. Although the rural villagers depended heavily on the forests for subsistence—both directly, for food and fuel, and indirectly, for services such as water purification and soil stabilization—government policy prevented the villagers from managing the lands and denied them access to the lumber. Many of the commercial logging endeavours were mismanaged, and the clearcut forests led to lower agricultural yields, erosion, depleted water resources, and increased flooding throughout much of the surrounding areas.

In 1964 environmentalist and Gandhian social activist Chandi Prasad Bhatt founded a cooperative organization, Dasholi Gram Swarajya Sangh (later renamed Dasholi Gram Swarajya Mandal [DGSM]), to foster small industries for rural villagers, using local resources. When industrial logging was linked to the severe monsoon floods that killed more than 200 people in the region in 1970, DGSM became a force of opposition against the large-scale industry. The first Chipko protest occurred near the village of Mandal in the upper Alaknanda valley in April 1973. The villagers, having been denied access to a small number of trees with which to build agricultural tools, were outraged when the government allotted a much larger plot to a sporting goods manufacturer. When their appeals were denied, Chandi Prasad Bhatt led villagers into the forest and embraced the trees to prevent logging. After many days of those protests, the government canceled the company’s logging permit and granted the original allotment requested by DGSM.