In the zine The Cell Tree, author Nolan Boomer evaluates the tree as an instrument of communication. In the wake of the recently popular book by Wohlleben, The Hidden Life of Trees, he takes for granted that the interconnection of tree organisms through mycorrhizal systems has become embedded cultural thinking. Boomer reminds us that trees have for some years been tapped as disguises for infrastructural cell towers and that “tree diagrams” deserve critique as inadequately complex visual display methods. The tree is being used for its very ability to absorb these uses with neutrality, as Jesse has noted. Part of the tree’s elusiveness may be in its ability to wear well so many guises that are actually obstacles to our understanding.

Trees, whether living or in decay, are points in larger systems. In the allee, they are placed into a selective grid, expressive of a Cartesian control over the measured landscape. Here the tree communicates the designer’s strong desire for spatial form and order, an architectural mimetic that also is transformative of the archetype of the forest. The tree remains productive.

Is it possible that trees might yet project some of what they are back to or onto us? If trees are communicators, then we must actualize ourselves as receivers. The tree has been encoded culturally and distanced spatially–both from natural communities with other trees and from a richer haptic association with humans. The tree has been a focus as an object, and as an object, it is something we can never know. To close the subject-object gap, we might need to recognize the tree, physically and metaphorically, by standing alongside it.

An unfamiliar blue bird met us one day in the alley and gave us this beautiful nature melody for a gift. 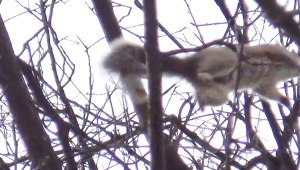 An interview with Michael E Beran, who is a Master Falconer at Wildlife Command Center, has provided some expertise and inspiration for our Squirrel Relocation Service to help squirrels find their new habitats after the pin oak trees are gone.

Pin oak trees are seasonal food resource for squirrels for a short period. Urban squirrels do not generally like to live in trees, but they also like to live in people’s houses and other built environment very well. They like to chase, run and fight with each other, so they are active all over the spaces, such as on the roof top and in the tree cavities.

Pin oaks are part of the habitat and they do provide a significant amount of food. Removing these habitats will definitely have impacts on squirrels’ life. However, taking them to an unfamiliar habitat is going to put them in danger, as they need to find food and water resources, and get themselves exposed to hawks, and other predators. More than 60% of relocated animals to unfamiliar habitats can’t survive. But, there are two potential options that can be done: 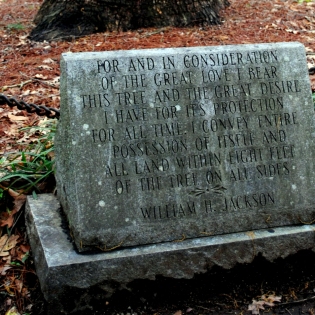 “For and in consideration of the great love I bear this tree and the great desire I have for its protection for all time, I convey entire possession of itself and all land within eight feet of the tree on all sides—William H. Jackson”

The text engraved into a stone plaque that sits at the base of ‘The Tree that Owns Itself’. A tree in Athens, Georgia, that is accepted by the city as proprietor to its own land. Whether there is an actual deed in the tree’s name is unclear, however, this white oak has unprecedented autonomy in an age of exhaustive human ownership.

How can it be that trees, the largest organisms on earth have no sovereignty in our cities? At what point was this deemed necessary? How can we move on beyond the tourist attraction of a tree that owns itself to a re-prioritized chain of beings where trees are no longer considered entities of ownership, but instead an invaluable system of independent, life-giving organisms?

One way to remind one another of the significance of the tree is through the introduction of treeness; to encounter the tree and tree’s systems through a one to one experience. In relation with human body and tree body, we can begin to find sameness and variance. With connection, comes respect. With respect, comes prioritization and ultimately emancipation.

This poster of a poem was spotted in a Tokyo shop window by Zeuler Lima, on leave to teach in Tokyo this semester. He has “roughly” translated it as:

But we can’t see the roots. 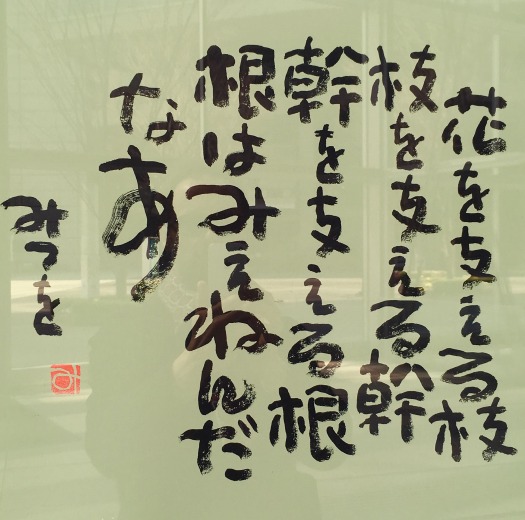 According to the research published in Journal of Comparative Physiology A, gray squirrels (Sciurus carolinensis) can differentiate green, red with other colors but not able to distinguish green with red. This symptom is called dichromatic color vision. (Reference: Are Squirrels Able to Enjoy the Changing Colors of the Fall?  C. Claiborne Ray, The New York Times)

That being said, the squirrels can not enjoy the fall colors of trees but can differentiate the trees with the environment.

From our observation, the most active time for the gray squirrels around and on our pin oak trees are early morning (before 8 a.m.) and late afternoon (4-5 p.m.), when the sunlight is not that strong. On cloudy days, they will more likely to show up than very sunny days, which further proves their resistance to strong sunlight.

However, our pin oaks would prefer a full sun environment to grow, which means at least 6 hours of direct, unfiltered sun,  according to the tree guide by Arbor Day Foundation.

As we all know, the pin oaks can provide great sun shading, that blocks the sun for the gray squirrels. This is one of the reasons why these two are good friends in addition to the squirrels’ needs of collecting acorns from the trees. 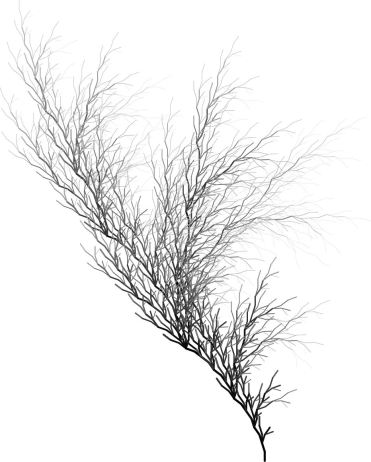 The L-system’s code entirely determines the virtual plant’s structure as it grows. This is an effective model if your goal is to produce a line drawing that resembles a plant or a tree. This model also has value in describing the fractal nature of plant branching patterns. However–like all models–it has its limitations. Unlike real plants, the L-system has no context. Two genetically identical trees, planted in different environments, will grow to be very different. Can we give our L-system the same responsiveness?

Here is F –> F+F[-F+F-[F+]F]-[-F[—F]-F] again. Looks pretty different, right? Here we see him reacting to his environment, but he no longer looks like a tree. This model is not deterministic; rather, the system evaluates the amount of “resources” along its branches (black = abundance of resource; white = scarcity) and grows (or expands itself, if you are familiar with how L-systems propagate) where it seems most profitable. What does this tell us?

My initial answer was “not much.” I don’t think we learn much about tropisms, or at least I think we could explore tropisms more directly and fruitfully by abandoning L-systems. It does tell us that a single tropism, divorced from the multitude of morphological motivations to which a real tree is subject, is a disastrous genetic disorder.

It also raises questions about the value of models, and about the practical uses of L-systems. It does not appear that L-systems are a useful model for modeling responsive systems. The value of L-systems is in their ability to model the internal logic of branching systems. Perhaps another method, another type of system, is needed in order to explore branching behavior, to explore the logic of external forces on branching systems. To be explored…. 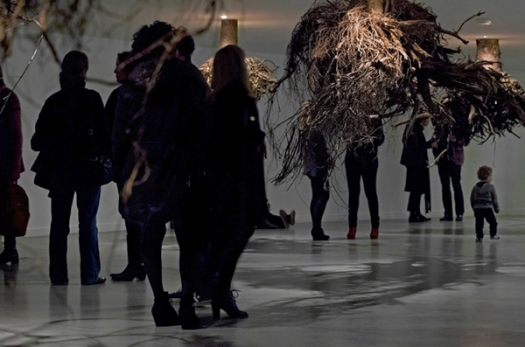 Italian artist Giuseppe Licari displayed his site-specific art installation named “Humus” at Tent Rotterdam museum in 2012. These Hanging roots made the central place of the museum become a “mysterious underworld”.

This landscape changed our view of the materiality of the trees and to start using it as a medium of creativity. In the meantime, it changed the way we see the space that we occupy and the space we couldn’t have occupied.

An oak tree died in artist Steve Tobin’s backyard, so he, with the help of an archaeologist, excavated the root system and cast it in bronze.

Artist Diana Scherer is experimenting with domestication of plant roots, forcing them to grow within confined spaces to form patterns.