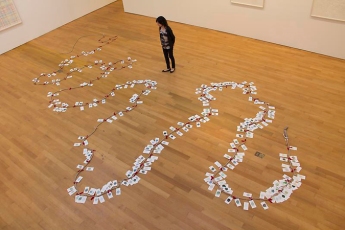 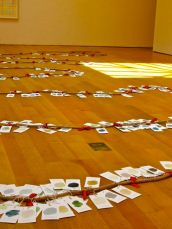 IN this work, Finch has re-recorded the 102′ depth of Walden Pond (first and last recorded by Henry David Thoreau), correlating its latitude and longitude with aqueous colors in 700 readings along a mariner’s sounding line, complete with terminal lead plummet. The tied red marks here designate every foot—instead of the traditional order of 2, 3, 5, 7, 10, 13, 15, 17, and 20 fathoms. (Intriguingly, mariners’ lines were shaped so that they could be read by eye, or by touch in the dark of night.

“Neither entirely documentation nor sculpture, the long line may best be considered a drawing of Walden Pond.” -James Cohan Gallery

As Rob has posted previously, is our drawing the root, the trench, or the displaced soil itself? The root we’ve uncovered may itself be thought of as a record of that soil—with all of its stones, pockets of air, and patches of nutrients, invisible to our sight and evasive of the touch of our hands. Scientific tools could help us correlate the root depth to porosity/compaction, to soil nutrients and fertilizers and competition. What would the tool be for measuring depth when it comes to ground—a plumb bob? A forester’s dbh tape, then, for the diameter of the root compared to the last measurement. An accounting of the number of branching moves and their direction relative to the tree, or to true north by means of a compass. Soil color at horizon depths could be measured as well as depth and trend—as Margot has noted, we are as designers drawn to correlates of color and their potential for variation. Curiously, there are no means to measure the passage of time in root growth. Is the map of root time in its corresponding branches above, their terminal bud scars from the year before yielding proportional information?

Or could our soundings be the points of variation from a lateral, level expectation: trend reversals from thick to thin to thick again; the doubling-back, the circling, and the backwards-forking, thwarting our lateral anticipations? The rooting behavior is more akin to creation of a networked mat with socialist tendencies than a set of hierarchical root structures. Would further abstraction make this more explicit? Would circuits and nodes rather than lines come to inform our understanding?

Like Finch’s drawing, ours might combine the visible and measurable, the analog and the digital, art and science. Our rendering(s) might reveal what underground truths we are separated from and create correlates to our sensory experience, thereby mitigating, at least in part, our soil blindness to the underneath.